Less More
1 년 3 주 전 - 1 년 2 주 전 #192 작성자 Ustina Molyanova
This Ted Talk is about how anger is an emotion that is viewed purely depending on race and sex of a person. There is a stereotype that women are angry, irrational, hysterical and unrealistic – leading them to think falsely of what they are actually feeling. However, when a man is angry, he is assertive and dominant – anger is by all means justified.
As girls grow up, they learn to bite their tongue and not address certain things or speak on certain situations they find themselves in. This is due to the fear of how we will be looked at by society. Also, it slowly gets engraved into our minds that we should second-guess the emotions that we are feeling because they might be “invalid” or “irrational”. The truth is that anger is an emotion that is not good or bad – it’s just a response of our minds to certain situations that we appear in. When women express what makes them mad – what anger conveys – people tend to respond to it with anger, which is very illogical and annoying. There is a quote that I think summarizes the main idea of the Ted Talk: “anger confirms masculinity, and it confounds femininity”.
The viewpoint of the speaker is that women are put at a disadvantage through the views of other when they express the same angry emotions that men do. I know this because she is a woman herself, that speaks upon personal experiences and different instances that she has come across, that help confirm this unfair stereotype when it comes to women being angry.
With that being said, I fully agree with the viewpoint of the speaker as it reflects double standards that have followed around humanity for way too long. The fact that it’s a subconscious response that people have to women being angry is what makes it harder to battle with, however understanding that it exists and has existed is the first step to tackling this complex issue.
In order to battle this problem, us, women, have to keep standing up for what we believe in. We have to keep getting angry and keep using our voices whenever we feel like we need to for our peace – not for the benefit of other people around us. It is also important to not dismiss your own emotions as keeping them in is what would cause greater personal problems.
The speaker mentioned that anger that women feel within even causes physical pain and sickness – whether it being short term or long term. It especially affects the death rates of black women with cancer, which is a shocking statistic. In short, feeling anger can reflect your physical well-being, and women are more prone to this because they feel more anger than men since they are taught to hold it in them instead of letting it out or talking about it. 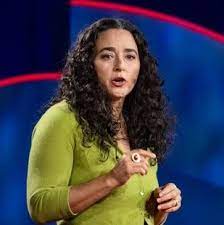