Rosa Parks and the Works of a Lifetime

Less More
1 년 3 주 전 - 1 년 2 주 전 #189 작성자 Ustina Molyanova
When you hear the name “Rosa Parks”, it speaks for itself in exponential volumes and carries a symbolic importance behind it. Rosa Parks was an American civil rights activist who was born on February 4th 1913 in Alabama, and passed away on October 25th 2005 after living a long, eventful and influential life, most known for the Montgomery Bus Boycott. Rosa Louise McCauley grew up in Tuskegee, Alabama, and at 19 years old made a move to Montgomery with her husband Raymond Parks. During this time, parks worked numerous jobs such as file clerk, insurance saleswoman, and seamstress, thanks to which the married couple lived in tolerable conditions. Consequently, Rosa Parks and her husband were actively engaged in civil rights work throughout the whole of their adult lives, in hopes of bettering life for African Americans in the South. Rosa Parks joined the NAACP (National Association for the Advancement of Colored People) and worked as the secretary from 1943 to 1956. Simultaneously, Parks also found the time to do volunteer work for the African Methodist Church and get involved in the Montgomery Voter’s League, which was dedicated to increasing the voter rights of African Americans. Another notable action that Parks has taken was her attendance to an educational workshop in Tennessee, which taught skills and strategies that would help fight for racial equality specifically through school integration amongst black people.
Rosa Parks is historically most known for her famous Montgomery Bus Boycott which played a major part in the on-going fight for social justice and racial equality. Rosa Parks particularly despised the Montgomery bus system and the application of Jim Crow laws within it. The “rules” stated that the white sections were at the front of the bus and black sections were at the back of the bus on every public transport. When all of the seats were taken in the white section, white people could request a black person to move further down the bus, even if that meant that they would have to stand. Essentially, the law stated that black people were required to give their seat to white people. There were even arrests that followed, when some black citizens refused to follow these rules, however the argument that this was dehumanizing was unrightfully ignored. On December 1st 1955, Parks got on the bus at the end of the day to come home from job as a seamstress, and sat in the colored section. Shortly after, a white man approaches her and demands her to move so he could sit down in her seat. Rosa Parks fearlessly refuses and as a result gets arrested. After being taken to the police station and thrown into prison, she had the ability to make one phone call – she decided to call the leader of the Montgomery NAACP. After this action was taken, the news spread quickly throughout the black community and a meeting was therefore called amongst 50 local black leaders. This was all followed by a boycott on the bus regimes on December 5th. This caused great financial implications to the bus company because about 70% of the population that used city busses regularly was black. To boycott, the black population car-pooled, used taxis or walked instead, which greatly decreased the amount of people who used the busses anymore. The Montgomery bus boycott lasted 382 days, after which the Court ruling forced the bus company to change its rules and laws due to the financial complications it caused. This was considered a meaningful win for the African American population, after all the laws were lifted.
Despite the continuous threats that Rosa Parks got, her bus boycott inspired more protests against racial segregation and inequality not only in Montgomery, but throughout other locations in the South. She even moved to Detroit, where she founded the “Rosa and Raymond Parks Institute of Self-Development” in 1987 that provided career training for young black people. Her goal was to educate the younger population about the Civil Rights Movement in America, in which she was so heavily involved in. This shows that the events in her life all added up and circled back to the on-going and tough fight against racial prejudice, which she contributed majorly to. Her success may be tracked through rewards and personal benchmarks, such as writing her own biography or being awarded the U.S. Congressional Gold Medal of Honor, however her intentions were always bigger than herself and centered thoroughly on bettering the community around her. Characterized by her selfless personality, Rosa Parks left an unforgettable mark on the Civil Rights Movement and helped better the world step by step for the future generations of the African American population. She was the epitome of the Civil Rights Movement and inspired many to use their voices in order to stand up against the unrightful laws put in place by the government system. Rosa Parks taught and motivated the African American population to never settle for anything less than equal treatment, freedom and social justice they deserved in America, and to never stop fighting for what they believed is right in our society and the rest of the world. 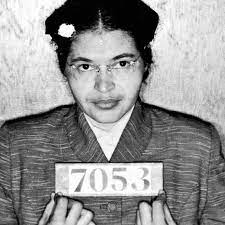